Buried amongst reports of a lecture on the beauty of historic books at the Assembly Rooms in Faversham, a daring robbery from a watch-shop in Folkestone, the theft of a pair of boots in Harbledown and drunkenness in Whitstable, the pages of the Faversham Gazette published on the 24 January, 1857, disclose a dark episode in the history of the village of Hernhill.

In response to rumours abounding in the area of the death of a child, police visited a Mrs Charlotte Butcher in Waterham, the grandmother of Amelia Collyer, a former servant in Margate – Amelia, a married woman, had apparently given birth to a child on 9 January. According to Charlotte Butcher, her granddaughter had given birth but the child was deceased, and ‘had been thrown down the cesspool.’ When a search could find no trace of the child, the police went to visit the surgeon for confirmation; during the visit, a neighbour came in a revealed that Mrs Butcher had admitted that the child had in fact been delivered alive, but her granddaughter had strangled it. The child’s body had been hidden ‘in a hole between the ceiling and the roof’ and the police took it to the Red Lion in Hernhill.

Amelia Collyer and her husband  had by now sailed ‘as emigrants to Australia on Saturday last, at the Government’s expense.’ The husband was reported as not being the father of the child and quite ignorant of what had transpired. According to the newspaper, ‘the statements of the grandmother, who does not bear a very good character in the village, are extraordinary.’ In the view of the surgeon, one Mr Francis, the child had indeed been born alive. The inquest found Amelia Collyer guilty of wilful murder, and issued a warrant for her arrest, although the story concludes by saying that ‘should the vessel, in which Collyer and her husand have embarked, have left…the officer will have some difficulty in effecting her capture.’ 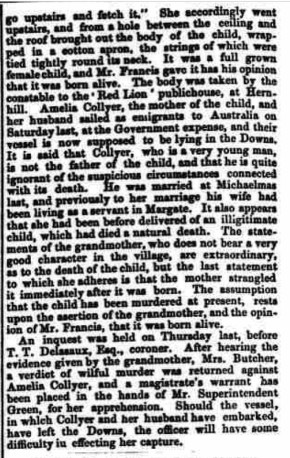 Click each image above to read the original story. Thank you to Johanne Edgington of Rotten Ramsgate Tours for providing the story, found in the British Newspaper Archive, shedding light on a dark chapter of Hernhill’s history…

Recently unearthed documents relating to the village were on display in Hernhill Church last Saturday, affording a fascinating glimpse into the village’s history. Stored in a steel chest, to which the key had gone missing, the key recently came to light, and the treasure-trove of maps, letters, invoices and photographs was set out for visitors to examine.

There’s always something rather magical about coming into contact with archive documents, a physical, tangible manifestation of moments in history; artefacts which would have been touched, handled by people lost to memory, and the collection represented a brief moment for these lives to step out of the pages of history and into the light.

As expected for an area rooted in agriculture, there were documents relating to tithes and land ownership, included details from August, 1840, and a map of the area from 1913.

There were plenty of letters relating to the village school, including a receipt for an insurance premium from 1935 for the princely sum of £2 11 shillings;

From the Second World War, letters to the then Headmaster, Mr S.B. Pritchard confirming the acceptance of the post of Divisional Commander to a Sea Cadet Camp in 1943; and most fascinatingly, details about the closure of the school for the wonderfully-named Whitsun and Fruiting Holiday period that same year.

There were also glimpses of mundane, pragmatic concerns that make up daily life, including a quote for cleaning and maintenance of the church clock in 1937. 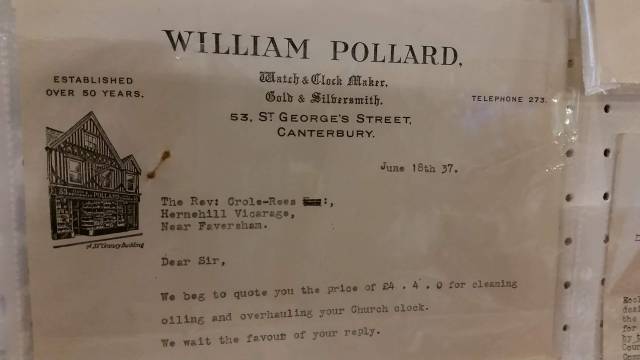 There was also a wonderful Book of Common Prayer from 1785.

Also on display was the rather endearing Our Homes, a copy of an address given by the Rev W.D. Springett, former Rector of Pluckley and Rural Dean of East Charing and (at the time) formerly of Hernhill, which included photographs of the church,  given at the church in the afternoon of Sunday 12 December in 1915; a possible morale-boosting community event during the dark days of the Great War.

All in all, the event was a marvellous look through a tiny window into the history of Hernhill and its people; thank you to all those who both organised the exhibition and who ran the event itself. Let’s hope these documents are preserved for future generations to enjoy.

Explore the story of Faversham during the First World War on this website here, including historic photographs and postcards from the period.

Or for a wider perspective, follow This Day in World War One on Twitter for tweeted events as they happened.